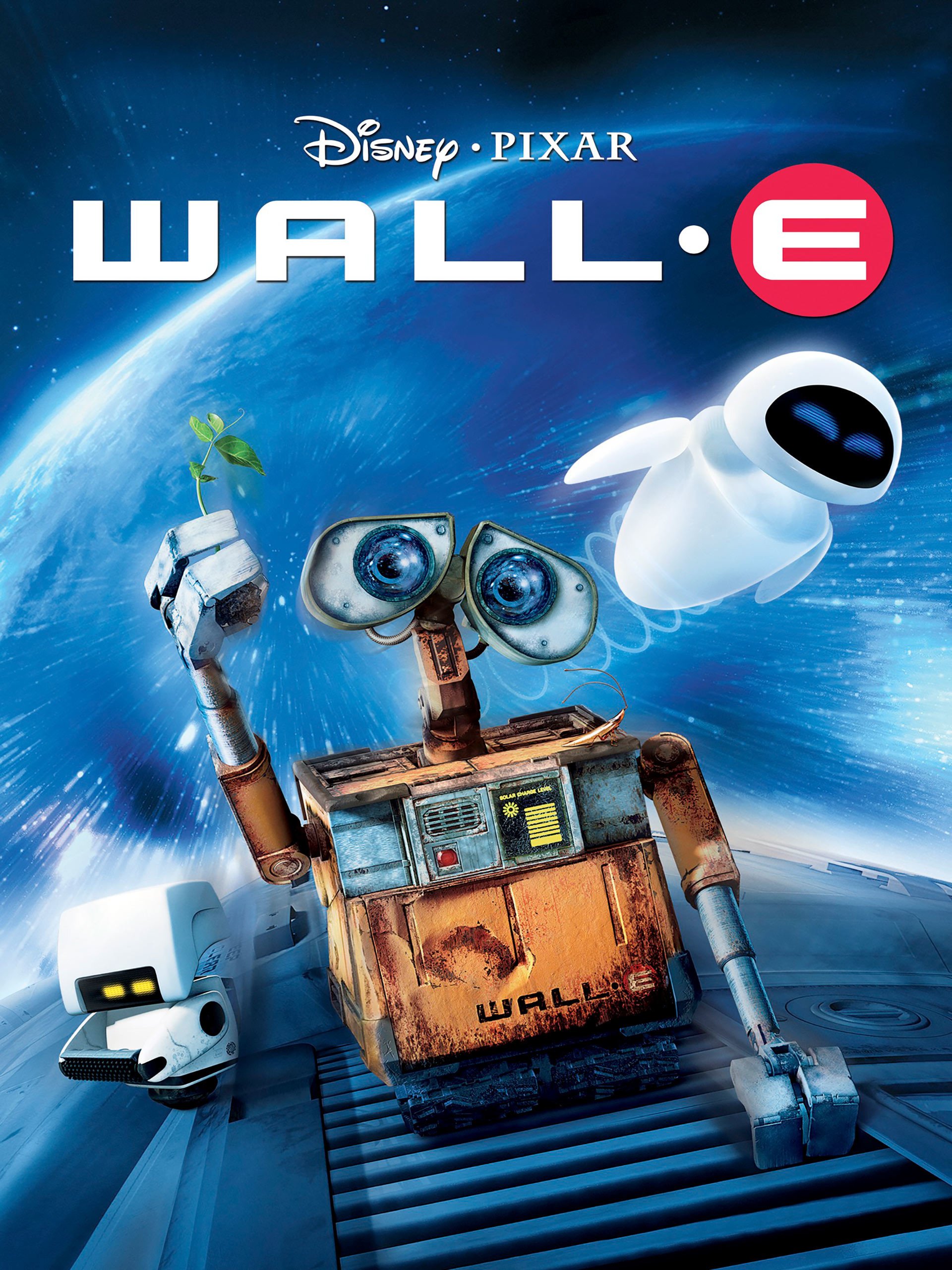 Dust storms rip across the landscape, scouring everything in its path. Skyscrapers of trash stacked as high as the rivaling buildings litter the landscape as far as the camera portrays. Not a single living plant is visible. This is part of the opening scene in the 2008 movie WALL-E. WALL-E, the hapless and clumsy protagonist in the film, is a cheery, round-eyed, squared bodied robot that travels throughout the land compacting garbage into small cube-like blocks that he, this is an implied “he” because it is never explicitly stated that WALL-E is male, then stacks; helping to create the aforementioned skyscrapers of trash.

One day a ship arrives bringing with it a new robot named EVE. EVE and WALL-E do not get along right away, as the audience sees in a scene where WALL-E is nearly eviscerated by EVE’s blaster. EVE, a highly focused robot of superior design, flies throughout the planet searching for any sign of plant life. Throughout her, another implied gender identifier, expedition on Earth, EVE starts to warm to WALL-E and the two become friends. On one friendly night, while hiding from a dust storm WALL-E shows EVE a plant he found while fulfilling his daily tasks. Upon seeing the plant, EVE immediately places into her stomach area and becomes immobile. The following minutes of the movie have WALL-E taking care of EVE while she protects the plant, thus setting up one of the first scenarios where gender roles come into view.

The movie WALL-E helps to establish what gender roles will look like in the future. The movie helps to both redefine and reinforce certain gender roles, outlining a future that has a fluid familial hierarchy but roots in biological gender roles. 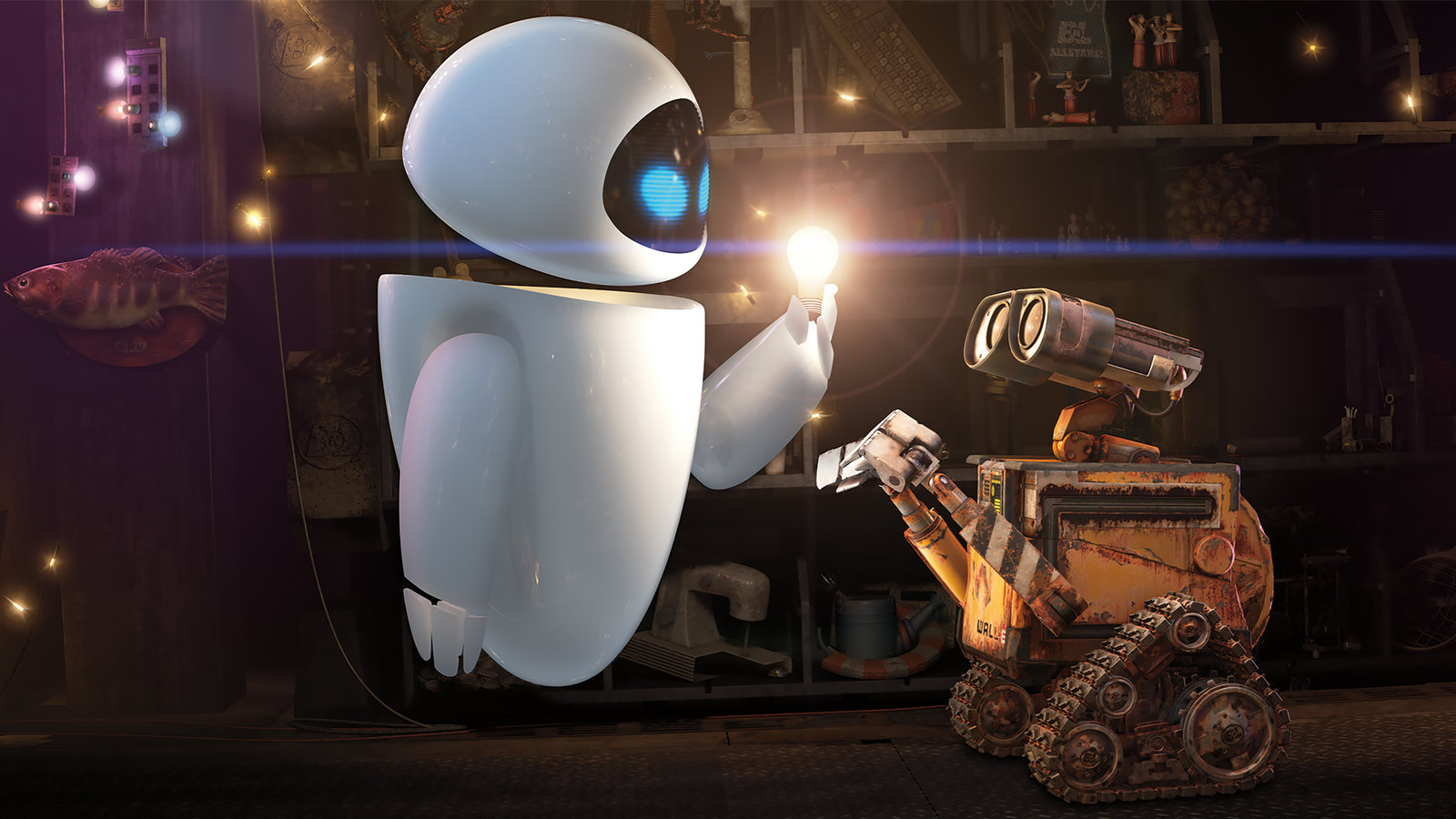 EVE helps to redefine and represent the cultural role of females in today’s society. One of the first times EVE is shown in the movie she is carelessly flying throughout the air, reveling in the joy of her new found freedom on Earth. After a short spell of gravity defying bliss she begins focusing on her “directive.” During one scene EVE is seen scanning through piles of waste, searching for any sign of organic life.

Frustrated by her misfortunate and agitated by an annoying magnetized crane, EVE blows up a line of ships, causing a fiery glaze to fill the sky. EVE, silhouetted in the foreground of this scene looks over her fiery ruin.

This scene can represent the #MeToo movement that has recently swept across the media, political, and corporate world. The #MeToo movement allowed for a stronger, more forceful voice for women. One that said they are tired of being treated less than and used as sexual objects. Women throughout all aspects of life in America stood up and told their stories of sexual assault and held their male counterparts accountable for their horrendous actions. The scene with EVE standing in front of her fiery carnage can represent a pent up emotion that has festered throughout the entirety of history and release of that emotion has toppled, like the ships in the movies, major institutions, celebrities, and politicians.

This movement also pointed to that fact that women have been routinely paid less than their male counterparts. Even though women have worked the same jobs as men, they are still perfunctorily underpaid. They are still underpaid despite the fact that “women now earn the majority of bachelor’s, master’s, and doctoral degrees awarded in the U.S” (National Center for Education Statistics qtd. in Harrington et al). EVE, being of superior design, can be representational of this statistical advantage and the modern woman. According a study done by Katherine Gallagher Robbins, Director of Research and Policy Analysis of the National Women’s Law Center, when a white man gets paid one dollar his white female co-workers generally get paid only 75.4 cents, while his black female coworkers get paid 60.5 cents. At the bottom of the patriarchal-hierarchy sits the Hispanic woman, who only gets roughly 54.6 cents compared to her white male counterpart (Robbins).

The relationship between EVE and WALL-E itself is something that can be read deeper, because their actions can be representational of how current young families are structured. As mentioned before, gender roles will be rooted in biologically necessary roles, but fluid in cultural responsibilities. Women will still have to be the ones who become pregnant, thus generally needing time off from work to cope with and recover from a 9 month-long pregnancy. During this time some men will have to help their partner during these times of need and a scene in WALL-E helps to showcase how this will work.

When EVE is immobilized by putting the plant in her body, signifying pregnancy, WALL-E

helps to protect her from the elements. He tries to keep her comfortable, and tries to entertain her as well. This time of immobilization and WALL-E’s role of filling in and helping out when needed can be semiotically read as a way for him to establish himself as the caretaker of EVE during her times of need.

EVE’s immobilization is quite different from when she is active, often seen flying around and busily working away to achieve her “directive.” EVE can be viewed as a strong female head of family, who works hard and is focused on her job while her partner supports her and establishes himself as a foundation for her to lean on when needed.

This role of WALL-E’s is representational of a current trend that sees more men staying home to be the primary caretaker, while their wives have become the amended “breadwinners.”

WALL-E establishes himself as a “new-age male” by supporting his partner and helping EVE achieve her professional dreams. This “new-age male” has evolved into what Boston College’s Center for Work and Family has called “The New Dad” (Harrington et al).

The New Dad is one who has chosen to set aside his career or professional ambitions to allow his female partner to pursue theirs. According to the same study by Boston College “51% of dads compared with 44% of moms would consider being a stay-at-home parent” (Harrington et al). By setting aside their ambitions and rejecting cultural stereotypes these New Dads are part of a leading movement in a modification of how families are structured. WALL-E put aside his ambitions on Earth and followed his partner to outer space to help assist her in achieving her “directive” much like these New Dads have done when they decided to allow their wives to be the main monetary provider for their families.

At times EVE stumbled in her professional pursuits and WALL-E was there to lend a helping hand when needed. This can be seen when AUTO and his small accomplice threw the plant down the garbage chute. WALL-E, like the supportive and loving “new-age male” that he is, was there to catch the plant and return it to EVE; allowing her to fulfill her duty. Another time in the movie, WALL-E sacrifices his body and possibly his life to help EVE achieve her “directive” when he used himself to stop a capsule from 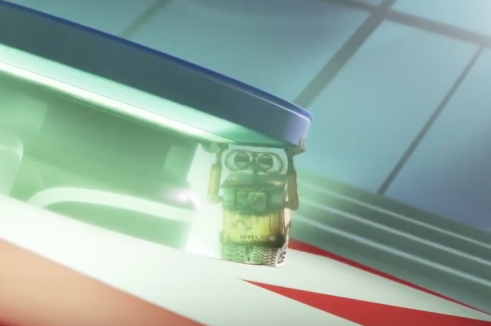 contracting; which would have resulted in losing the opportunity to place the plant in its obligatory destination. WALL-E sacrificing himself here can represent a New Dad’s sacrifice to reject stereotypes and cultural norms that allows himself to promote not only the betterment of his family but that of his parental partner as well.

Another way to read the gender roles of WALL-E and EVE is one that is representational of a same-sex couple. While it is implied heavily throughout the film that WALL-E is male, it is never explicitly stated the this should be the case. There is evidence that actually signifies the opposite. If the placing of the plant in EVE’s stomach is to signify or represent some sort of comparison to female pregnancy then the same logic should be applied when WALL-E does the same. In the scene where WALL-E and EVE begin their intergalactic waltz, it begins with WALL-E taking the plant out of “her”

stomach. Now this scene and the many other aforementioned ones are all just part of a movie targeted to a child audience, they nonetheless can be read in a way that helps to establish the movie WALL-E as one that helped to shift the paradigm of gender roles.

WALL-E is a movie that is full of many different underlying messages. Messages that include the need to focus on climate change, obesity, and the growing disconnect with authentic human interaction. Among these messages was also the underlying note of gender roles and its future significance and shifting function. EVE, the metaphorical modern woman, is more educated and ambitious than most of her male counterparts in the movie which is akin to the facts of today in regard to higher education statistics. WALL-E can be depictive of the new-age male, one that supports his female counterparts and doesn’t assert his antiquated dominance over them. Their combined roles help to define what modern and future families look like. Ones that are rooted in biological gender roles but fluid in their familial hierarchy. WALL-E allows the viewers to reject cultural norms and reimagine a world where gender roles are a fluid hierarchy and not a patriarchy. 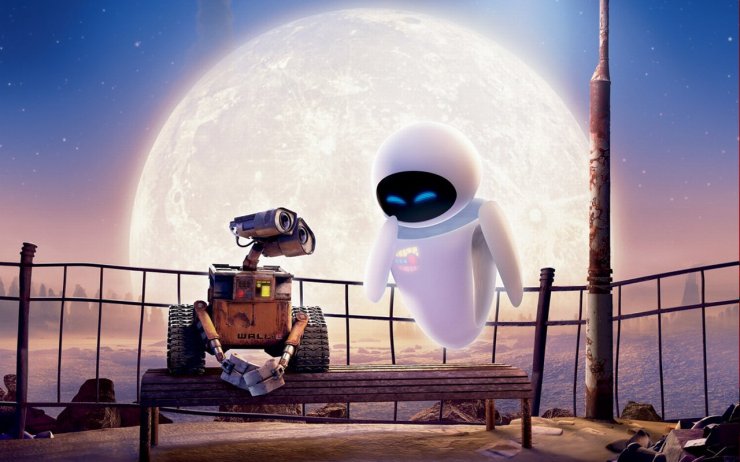